This is a story of the photographic arts and where it could lead to anyone who follows their bliss as a landscape photographer.

I used to say, all the photographs I would ever take are already created in me, they are just waiting to be expressed. Each image has a clear purpose, as yet to be revealed. This story started out as a personal photography project and grew into a large corporate installation.

As my wife and fellow visionary photographer, Holly, were walking back to our Jeep in the parking lot of one of the largest corporate facilities located here in Ventura County. I looked at my Holly and said, “Wow I can’t believe we just completed that project, it took 2 years to complete. Let’s soak in the moment… This is one of those moments that doesn’t happen too often.” We then went out to dinner to celebrate.

What I’m talking about here is a major corporate installation of our body of work of landscape photographs.

This story starts out at a very small café in Camarillo, California. One that we stumbled in to for a bite, quite accidentally. Being both foodies, we basically try to have lunch together as much as we can during the work week. This is our thing as we’ve been doing lunch for almost 24 years. On this particular day, we paid a little visit to a barbecue place we liked, next to a bowling alley. 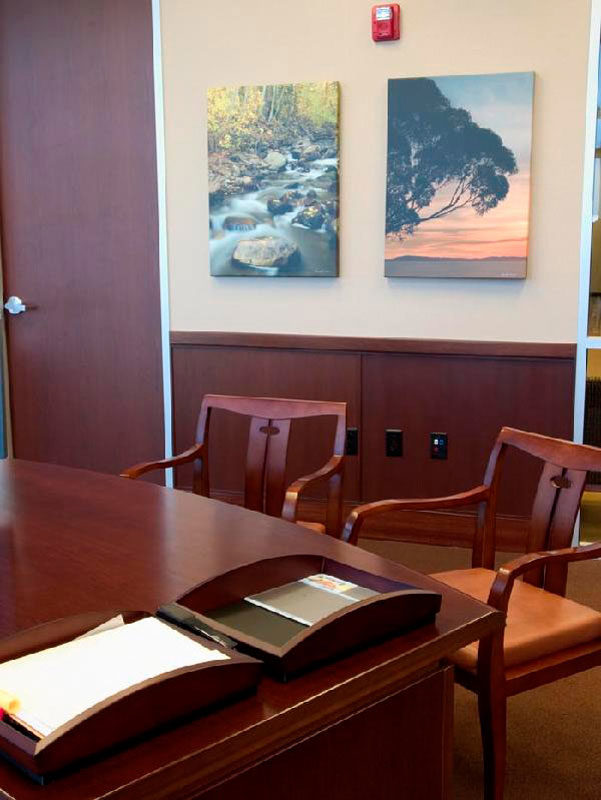 There are not too many barbecue places around here, at least there wasn’t back then, so it was a treat. We had dined there a couple of times over the year and were quite surprised when we rolled in that day and found out it was out of business. We were disappointed and went to another one of our favorite spots. A few weeks later we happened to drive by again and noticed a new sign,”The Meltdown Cafe” opening soon.

The both of us were film based photographers for years, and we were just coming into the digital age of image capture and had been doing quite a bit of traveling in North America, with a few trips to Europe and the Canadian Rockies under our belt. We had quite a few images burned to CDs along with reams of photographic negatives from years of shooting.

Also at this time, we were heavily invested in the photographic fine art show circuit throughout Southern California on the weekends. We did shows from Santa Barbara to Palm Springs and everywhere in between.

This was in the early days of printing digitally. Most of our photographs were printed on early inkjet Epson printers and smooth semigloss papers. We would have them framed and sell them from our booth, along with some early canvas printing efforts. I would build out frames myself and stretch the canvas over them. These days, people take all of this pretty much for granted, but back then, not many people were printing on canvas. It was quite unique back then.

We would also try to find other venues to display our photographs for sale as well.
We had framed displays in quite a few coffee shops, restaurants and bars throughout Ventura County. The fine art shows provided a good stream of clients back then as we didn’t license our images that often, if at all. The internet was not quite developed as it is today. If you wanted to make a living in the fine art end of the photographic arts, you had to get out there and show your work to the public.

All said, this was how things worked for years. We spent long hard weekends working the art shows, sometimes two days in a row, setting up the tent, hanging the displays, and talking about the photography. People were always asking about the images and how we captured them and we even sold a few. I guess in the back of our minds, we had ideas about teaching photography and working that in somewhere down the road, perhaps taking people to the places we have been and teaching them on location.

On one particular day we decided to drive back to that bowling alley and see if that new restaurant the “Melt Down Cafe” had opened. It had, so we walked in and saw some empty tables. There was a big guy behind the counter with a scruffy beard, that was quite talkative and excited about his new venture. It was a one-man operation. He just opened up the day before. He placed the menu in front of us and said anything will be amazing guaranteed!

Holly and I laughed and we ordered a couple of interesting sounding sandwiches. He was right, they were unique and different kind of a California cuisine thing, nothing like the barbecue place. We paid our tab and put the Melt Down Café on our top 10 list of places to eat in Camarillo.

About a week passed and we decided to drop in once again. We had been looking for other places to hang our photographs and I did remember he had some blank walls.

He remembered us right away and we introduced ourselves and we told him what we did and handed him card. There wasn’t many people in the restaurant that day, so we sat down and we talked. He introduced himself as John Seaberry. He had moved down here from the Pacific northwest and was really into the restaurant business. He had some family  connections in Southern California and wanted to try something new and get away from the big rat race of the big restaurant industry he was involved in and try something small.

We told him a little bit about our travels and what we did with our photography. Turns out he was quite excited about what we did and really enjoyed California landscapes, especially the Eastern Sierra. As it happened, we had just completed framing some 8 x 10’s of the Eastern Sierra and he was more than happy to let us hang them at the restaurant. We had a bite to eat, then returned later in the week to hang them and gave him a stack of business cards.

A few weeks went by and then Holly got a phone call from someone saying he dropped into the restaurant and saw our photographs and would love to have some of these photos printed and framed a bit larger in his business office.

Turns out this man was the CFO of Sysco food Corporation. Their facility was expanding and he didn’t want pictures of fruit and vegetables on the walls of their offices. He also had an affinity for the Eastern Sierra as he just moved out from the East Coast and spent some time traveling the state before he took his position at Sysco. He had the idea of having the natural landscape of his territory on the wall instead of the fruits and vegetables. That particular day he was visiting some of their customers and our friend, Mr. Seaberry, who had just opened an account. He gave us a call and Holly went out to do some of the measurements to see when he might need.

I can remember when Holly phoned me back after being at the job site to this day. The phone call went something like this: “He’s got quite a bit of space here and it looks like it could be a pretty good job”. I said great, how big is his office and how many photographs do you think he might want? There was a noticeable quiet pause on the phone… She then said, “It’s about 120,000 ft.” I said, “What do you mean it’s 120,000 ft?” I said, “You mean it’s not a small office?” Holly said, “No, it’s a large corporate facility.”

I really got excited. Then I asked again, “How many landscape photographs do you think he’s going to need?” Holly said, “I just measured. About 300!”

After all was said and done, the job took 2 years to complete using our current catalog of California photography in addition to many additional shoots to complete. It included 300 printed and framed 16” x 20” California landscape and lifestyle photographs in addition to 30” x 40” canvas wrapped prints for their work spaces and executive offices. This building has very few windows looking out, except for the executive offices. So many of Sysco’s main office workers came up to us and expressed their joy, as they now have windows to the outside, thanks to us, and can enjoy beautiful scenery every day!

If you would like to learn more about Jansen Photo Expeditions and how to create beautiful imagery, go to: www.JansenPhotoExpeditons.com